Statistical tests that do not require the normal distribution of the sample data are known as non-parametric tests.

Non-parametric tests are used when the data is not normally distributed. These tests are used to measure the significance of differences between two groups or treatment and control groups.

Sign test, Wilcoxon rank-sum test, and Mann-Whitney U test are some of these non-parametric tests.

Wilcoxon rank sum test is a non-parametric test of statistical hypothesis. It is used to compare the distributions of two samples and determine if they are from the same population.

The Wilcoxon rank sum test is a non-parametric test of statistical hypothesis. It is used to compare the distributions of two samples and determine if they are from the same population. It can be used for both independent samples and paired samples, but it cannot be used for dependent (related) samples.

The Wilcoxon rank sum test is based on the ranks of observations in each sample rather than their raw values, which makes it less sensitive to outliers than other parametric tests such as t-tests or ANOVA.

The Mann-Whitney U test is a non-parametric test for ranking data. It tests the null hypothesis that the two groups being compared are equally spread across the measurements of their variables.

Here you will find an example of the sign test.

The Sign Test is a non-parametric statistical test whereby very few assumptions are taken about the nature of the distribution being tested. This statistics hypothesis test works on the theory that there are equal probabilities of two outcomes. Instead of magnitude, this non-parametric test works on the direction of + and - sign of the observation. Since, there are just two choices i.e. + or -, so the NULL proportion is taken as p=0.5.

The sign test can be used when you have no idea about the distribution of values in your data set. The sign test is also useful if you need to make decisions quickly, as it is an easy and quick way to compare two populations without knowing their distributions.

The sign test is best used in exploratory data analysis.

This test is used for the testing of the null hypothesis as well as in the situation where you want to find out if two groups are sized equally or not. It is also used in the case of sample t-test analysis as well as paired t test statistics.

There are two types:

1. First of all, we get the random sample of data pairs (d1, d2). Below data pertains to the efficacy of two drugs. Suppose, we want to look out for the chances if any of the drugs works better than the other drug or not. 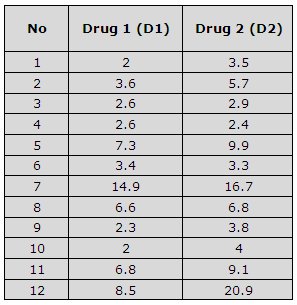 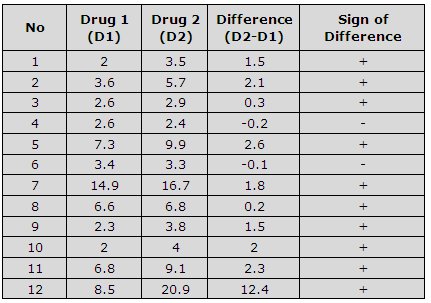 7. Find the P-value by using the standard normal distribution table. 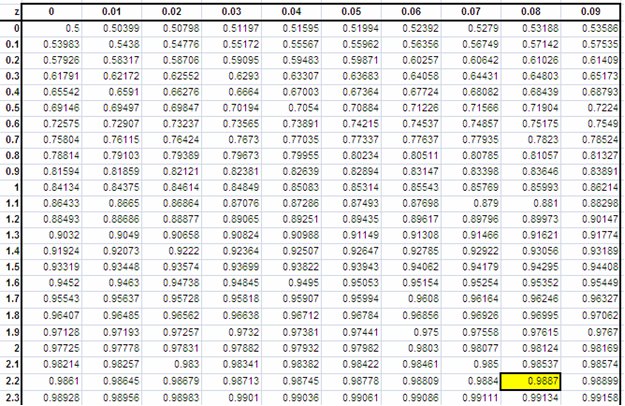 The Sign Test can be applied to both, the single observations or the pairs of related observations. However, the most useful application of this non-parametric test is in the before-and-after scenarios where the effects of a certain phenomenon on the same population are evaluated before and after the phenomenon is administered.