This most common distribution is your first step to the understanding of statistics.

The probability density function of a normally distributed process is known as the Gaussian function, which appears in a characteristic bell shaped curve when plotted against the values of the variable.

Where is the mean and 2 is the variance of the distribution.

A graph of the probability density function (PDF) for normally distributed stochastic process with different values of standard deviation (square root of variance) is given below. As the variance or standard deviation increases, the height of the characteristic bell shaped curve (the probability of the variable to cluster closely around the mean value) decreases. A normal distribution also exhibits a normally distributed histogram, provided sample size is very large. 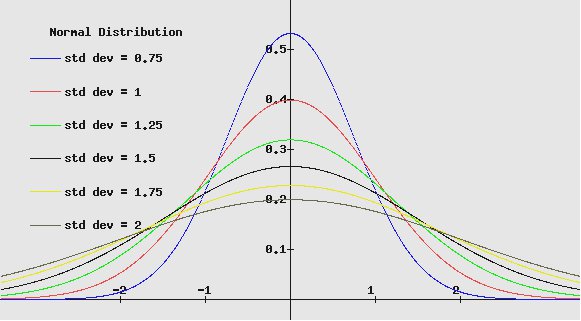 How to conduct the Process?

Some other fundamental statistical probability distributions are:


Do You Want To Understand Statistics Better?